Back some forty years odd years ago when Edward Heath was Prime Minister of the United Kingdom, and the coal industry was still nationalized, the miner’s union went on strike, just after the Christmas Season. This followed an overtime ban that had started the previous November. The strike began on January 9, 1972 and lasted 7 weeks.

Tellingly, just after it began some 17 schools had to close, as they had no heat in their buildings, without coal. Within a month the Government had to declare a state of emergency, and factories began to close due to a lack of power. Sensibly the Government of the day gave in to miners’ demands and they went back to work at the end of February.

Two years later there was a relatively similar series of events, with an overtime ban, followed by a three-day workweek as power cuts and blackouts developed, but this time Edward Heath also called a General Election, assuming he had the national sympathy. He was wrong, he lost.

These lessons were not lost on Margaret Thatcher, who had noted that it was not smart to offend the miners when the nation still relied on coal for much of its power, and when, in the winter, there was not a lot of coal in reserve at the power stations (because of the preceding overtime bans leading into winter). Thus, in 1984 when she, in turn, had to face the wrath of the National Union of Mineworkers (NUM), she had made sure that the situation was much different. Prior to the strike she had arranged for coal stockpiles to be built up over a period of three years. In addition the strike began on March 5th. It started because of the Coal Board decision to close 20 mines (since the earlier strike the number of miners had already fallen from 250,000 to 187,000 and the closures would cut another 20,000 from that number). It crumbled a year later, with a vote to return to work on March 3, 1985. The mining industry never recovered, and by the turn of the century the NUM was down to around 5,000 members.

I was reminded of those days by the latest clash between Gazprom and the Ukrainian government. In the past, when the Russians demanded that Ukraine pay its gas bill, the timing usually took place at the beginning or in the heart of winter. The problem that this gave the Russians was that they were supplying Western Europe through Ukraine, and any shut-off in the supply of natural gas to Ukraine had immediate consequences in Europe, which has become increasingly dependant on that gas. The result of the timing of the disputes was, therefore, generation of considerable diplomatic pressure leading to a relatively rapid resolution, without Russia getting all the deals that it wanted.

This time, however, it may be that Russia has learned, as Margaret Thatcher did, that timing is critical in this type of situation. Instead of waiting to November to call in the bill, Gazprom has presented it in June, when European demand for natural gas is lower. In addition the Nord-Stream gas pipeline is in place. This carries roughly 2 trillion cu. ft. a year of natural gas 760 miles into Germany, without passing through Ukraine. The twin pipes were completed and on line by October 2012. 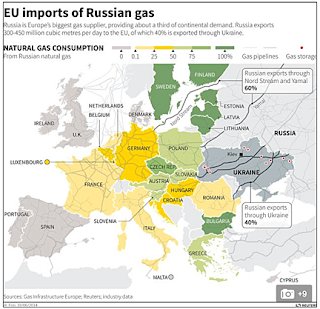 And while there has been talk about bringing in natural gas through Nabucco, that has slowly faded in the face of reality. Gazprom (as Brenda Shaffer has noted) has done remarkably well in gaining control of the different feeds and pipelines that come out of the East and head west into Europe. For example:

Moscow has taken steps to block the entrance of Iran into European gas markets; in 2006, the Russian company Gazprom bought a pipeline from Iran to Armenia and limited its size to ensure that it could be not be used to carry Iranian gas into Europe.

Consistently supplies have been confined to pipes that are under Russian control. It has a percentage of the Interconnector that carries natural gas into the UK and there has been little regard paid as it stepped in and took interests in other national pipeline companies across Europe.

So Gazprom can now wait while Ukraine exhausts its own reserves. It is reported to have some 13.5 billion cu m on hand, but it needs to have 18-20 billion at the start of the winter, if it is to get through. By stopping the flow now, Russia is having Ukraine burn those reserves between now and winter, while keeping the nations further west supplied. This means that the pressure will become that much more intense on Ukraine as winter starts to approach, and there is no alternate source of supply.

Gazprom has not hesitated to profit from this in the past, and is already in a position to demand whatever price it sees fit.

Ukrainian and Russian officials have been fighting about gas pricing since Yanukovych was ousted. After Russia annexed the Crimean Peninsula, it hiked gas prices for Ukraine 81 percent, from $269 per 1,000 cubic meters of gas to $485. That price was the highest in Europe, and Ukrainian officials refused to pay, calling it politically-motivated retaliation.

Gazprom has since lowered its price demand to $385, broadly in line with prices for other European countries. Ukrainian officials have sought to pay less and have said the way Russia was structuring the deal meant they would remain vulnerable to price hikes if they did anything to displease the Kremlin.

“Any price they offer is in the form of a discount that can be undone at any time,” said Pierre Noel, an energy security expert at the International Institute for Strategic Studies.

Don’t hold your breath waiting for this to be resolved.

From: Author is External News
← ‘Tour de Neglect’ reveals huge challenges, incremental progress on Buffalo’s East Side
What really annoys scientists about the state of the climate change debate? →