The EIA helpfully produces a breakdown of the global liquid fuel supply into components. This allows us to distinguish change in the supply of "oil" – narrowly defined as crude oil plus condensates (hydrocarbons which come out of the ground as liquid) – from changes in other things (natural gas "liquids", most of which are actually gases like ethane, propane, and butane, ethanol, and refinery volume changes. 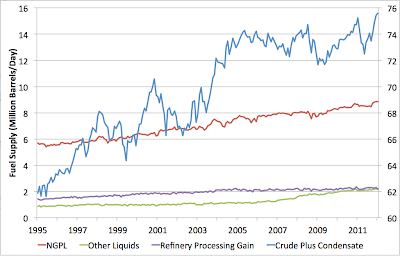 The above graph shows these four substreams – the crude and condensate (C&C) is on the right scale and the others on the left scale. This approach is designed to make it easiest to compare changes. The interesting news is that crude+ condensate, which has been pretty much plateaued since late 2004, has now made new highs. So clearly "peak monthly oil" is not behind us.

At the same time, the data still seem to me to be consistent with the overall "peak oil moderate" worldview – that in 2005 we entered into a situation in which it became very difficult to raise oil production and that placed significant constraints on the global economy and made recessions more likely, but that the decline in global production will be slow and fears that this would lead to an abrupt collapse of the global economy were overblown (the "doomer" view).

At the moment, the plateau in C&C has a slight upward tilt and it's not possible to say declines in global oil production have begun: 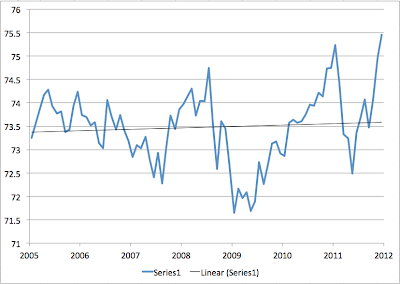 Note that the upward slope to that line is not statistically significant (I only get p=0.2 even ignoring the autocorrelation). So we are still on a flat plateau statistically speaking.

Finally, here is a more traditional stacked area graph showing how the non-oil parts of "liquid fuel" have allowed the latter to rise even as oil proper is essentially flat: 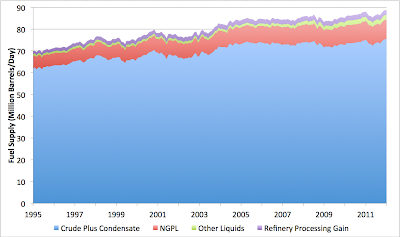 From: Author is External News
← Emirates’ profits down 72 per cent
Deterrent needed to prevent doorings, say parents of victim →