I'm a bit slow in getting to this, but there now seems to be a bit of a mystery about Saudi oil production (latest data shown above). In mid 2011 through mid 2012, Saudi production was hovering a little below 10mbd (averaging all data sources). It started to drop a little bit last fall, but then in November and December it took a really sharp dive, and now seems to have stabilized at or a little above 9mbd. 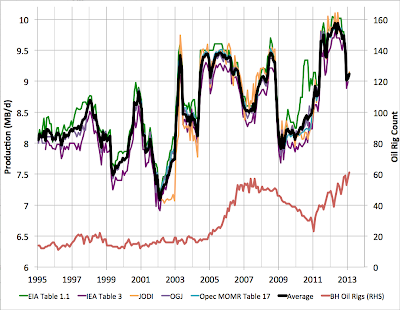 In total, they've lost almost 1mbd of production between July and December. This is a large move. For example, it's as large as the 1mbd loss in 2006, and two thirds as big as the 1.5mbd production cut implemented to stabilize prices following the great recession in 2008.

As usual, the big questions are whether it's voluntary or due to production difficulties, and if it's voluntary, why they did it. For past episodes, there's little doubt that the late 2008 cut was intentional to support prices, but the 2006 production decline is controversial. I'm of the view that it was forced due to long-standing underinvestment in their capacity meaning they couldn't maintain 9.5mbd at that time, but some other well-informed oil bloggers (eg Robert Rapier and Euan Mearns) have maintained that it was an intentional production cut.

In this case, the fall is very abrupt, which is more characteristic of an intentional cut. On the other hand, it comes amidst a generally rising rig count (signaling more work is being done to maintain or expand capacity). If it was voluntary, it's not immediately obvious why from the spot price chart: 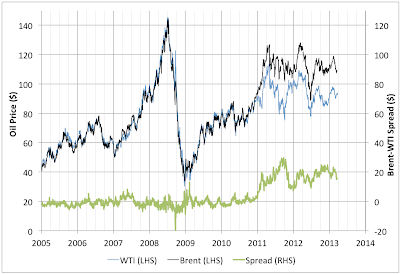 Brent prices were stable in the $100-$120 range that is presumably satisfactory to Saudi Arabia, so it's not obvious why they needed to cut production. On the other hand, the production cut doesn't seem to have caused a large price increase (which you might think it could, given the short-term inelasticity of oil demand). This suggests perhaps the production cut offset increasing supply from elsewhere. The most obvious candidate is the US: 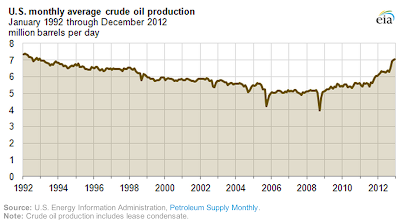 The US had a fairly abrupt production increase of 700kbd between August and November 2012. So one hypothesis would be that Saudi Arabia may have seen that, and then sharply cut their own production in November and December to prevent the sudden surge in US supply from causing a drop in world oil prices.